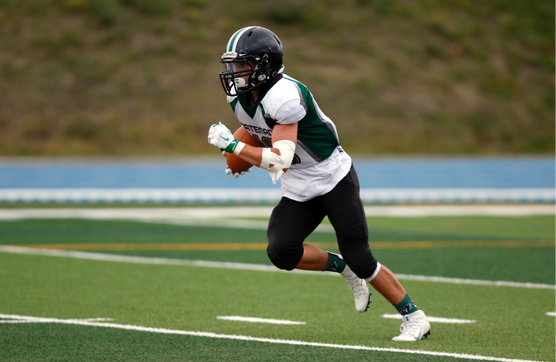 Human movement patterns are established the minute we begin to ambulate.  Crawling, sitting, standing, walking, etc., all require practice and a little incentive instruction. Mostly, these patterns are learned through the process of trial and error, as well as acquiring the strength to perform these movements as we progress in age.  Athletic movement is really no different, and the patterns associated with running, jumping, landing, pivoting, and throwing are all learned through practice and instruction.

Sports skills are often seen as the first avenue of human development.  The fundamental factors involved with learning and positioning the young athlete to properly execute the movement, are often overlooked and forgotten by coaches strictly focused on the outcome of the skill, as opposed to the overall development of the individual.  Not to be misunderstood, practicing and experimenting with throwing a football or baseball, shooting a basketball, or kicking a soccer ball are still classified as sport-skill fundamentals and should be encouraged.  The ability of a coach to educate young athletes on the importance of basic movement skill competency can be difficult due to many factors.  One, the kids may find it boring if it is set up in a way that collegiate athlete would be training, or two, the coach is unaware of the fundamentals that need to be established.  The solutions…make it fun and know your fundamentals!!

The essential movements that all young, developing individuals should be aware of are listed and described below.  Coaches (i.e., all professionals that work with young athletes/individuals) should recognize these movements and create ‘fun’ applications for youth sport practice, as well as physical education classes.

Guidelines for teaching proper running mechanics are described in detail with the thought that any coach can adequately implement these with minimal running background.  Optimally, these aspects should be practiced daily or implemented prior to or during practice or physical education classes, to better establish this movement competency.

Posture – Posture for running mechanics is typically associated with proper alignment of the shoulders and pelvis.  Essentially, encouraging individuals to ‘stay tall’ when they run.  Everything your mother taught you as a kid, “sit up straight” and “stand up tall”, apply to the first application of proper running mechanics.  The pelvis, or hips, should follow suit with adequate upper body alignment, and should be positioned under the torso.  Adequate posture properly aligns the joints and muscles to perform their intended movements.  If restrictions occur during proper alignment of the shoulders and hips, other interventions may need to be considered.

Arm-Swing – The arms, from the shoulder to the wrist, dictate the speed at which the lower body can potentially move.  The arms also create adequate rotational balance when propelling the body forward in a fast manner.  Proper positioning of the arms should allow for a 90 degree bend at the elbow, with the hands relaxed, and a ‘looseness’ in the shoulder to allow a forward and back motion within the shoulder joint.  The motion of the arms at the shoulder should follow a ‘chin to pocket’ pathway.  The faster the arms are propelled backward, the more of a ‘stretch reflex’ that can occur in the muscles and tendons of the shoulder, creating more speed moving forward.

Stride – Stride is determined by the length of the individual’s legs and can be coached in a way that adequately encourages a full range of motion throughout that leg length.  Two aspects of teaching stride are proper knee lift and adequate heel positioning during the swing phase of running.  Knee lift should occur at or around 90 degrees of hip flexion (knee parallel to the ground) to optimize stride length.  Each time the knee does not reach a 90 degree position at the top of the swing phase, especially during sprinting, the athlete’s stride distance is reduced.  The heel should be positioned as close to the glutes as possible as the foot is ‘pulled thru’ during the swing phase.  Efficiency and velocity are optimized when this mechanism is executed properly during the swing phase.  Speed drills referred to as ‘pawing’ or ‘clawing’ can reinforce this optimal motion of knee lift and heel position, which is then verbally reinforced during running drills/games.  As much as the individual is picking their knee up, they are also mimicking the motion of ‘kicking their butt’ as they pull the foot underneath the pelvis.  Ironically, simply encouraging “knee’s up” and “heel thru” maximizes stride length and can prevent over-striding.

Foot strike – The process of landing consistently on the ‘ball’ of the foot (forefoot) is easily encouraged but often hard to maintain.  But, we need to start with encouraging!  The maintenance comes with consistency, strength gains in the calf muscles, and overall soft tissue adaptation.  Short distance runs/sprints, i.e., 20m, 30m, 40m, etc., should be encouraged early on at low repetitions, to adapt the muscles and tendons of the lower leg to forefoot sprinting.  The main reason for consistently landing on the ‘ball’ of the foot is to reduce the amount of braking force that can occur if landing on the heel of the foot.  Braking force is a slowing or stopping of the running momentum which is not optimal for speed improvement, and it can also induce lower body injuries if done frequently over time.  By impacting the ground correctly, high forces are absorbed through the muscles instead of the bones and joints.

Running and running mechanics are the basis of most sport movements.  Executing plays in football, creating space to perform a jump shot in basketball, or positioning the body to kick a soccer ball, all involve running movement.  By establishing and practicing these principles early, young athletes may develop an efficient and precise running technique.

Jumping and landing tend to occur within or proceeding a running movement.  Rarely are we in a position to ‘jump’ and ‘land’ in one spot.  Establishing good jumping and landing mechanics can not only improve young athlete development, but may also reduce injuries to the lower body as athletes mature and competitive demands are higher.

In looking at the jump from a basic athletic position, we will point out the principles of a properly executed counter-movement jump.  Body posture is upright, the feet are positioned at shoulder-width, and the arms are at the sides but in a ready position.  As the individual descends to almost a squat position, the arms bend to a 90 degree position and are thrust back (similar to running mechanics) to create a slight stretch in the shoulder.  Body weight is over the mid-foot/fore foot to ‘set’ the muscles of the lower leg.  The hips are pushed back to ‘set’ the muscles of the upper leg to forcefully extend on accent.  As the descent approaches a half-squat position, the arms are propelled upward as the hips/legs are extended, elevating the body off the ground.  At peak jumping height, the body readies itself for a controlled landing.  The toes establish initial contact with the ground, absorbing the impact with the muscles of the lower leg (gastroc-soleus complex).  As the lower leg absorbs the impact, the weight is slightly diverted from the muscles of the lower leg to the muscles of the upper leg (thigh, glutes, and hamstrings) to properly decelerate the mass of the body.  The arms follow the opposite pattern for upward explosion and provide balance and stability upon arrival at earth.

The fundamental strength movements consist of a pushing movement, a pulling movement, a squat movement and a lunge movement.  These movements do not need to be performed strictly within a weight training area, consisting of machines or free weights.  These movements can be practiced and performed using bodyweight or simple tools like resistance cords.  Most daily and athletic movements involve a version of a push, pull, squat or lunge.  To become proficient and confident in utilizing these movements enhances development in sport, as well as decrease the chances for injury.  Physically fit and competent individuals, especially youth athletes, will advance faster as they become more mature and more competitive.

Push – Movement originating from the chest and progressing outward in a horizontal or vertical plane.  Pushing movements can be performed by doing a standard push-up, or by using resistance cord devices that allow both double-arm and single-arm pushing/pressing motions.  Using variable resistance applications promotes ‘open-chain’ stability in the shoulders and forces the muscles to work harder as the resistance is extended.

Pull – Movements originating away from the chest and shoulders and progressing inward in a horizontal, vertical and diagonal motion.  Pulling movements can be performed using bodyweight via pull-ups or curl-ups, using suspension trainers to modify the pull, or using resistance cords.  All methods can be modified to use with young athletes; variable resistance cords provide the easiest method of teaching the pulling movement, and can be performed with both double- and single-arms.

Squat – Movement of the legs from a standing position, to a 90 degree/90 degree position in the knees and hips, then ascending back to an upright position.  The squat can be performed using bodyweight and is strongly encouraged to properly educate the individual.  Weights (i.e., barbells, dumbbells, and kettlebells) can be used to progress the movement.  Resistance cords can be attached from all angles during a squat movement to promote not only strength, but also stability in all planes.  Squat movements can be performed using one leg once the individual perfects the two-leg movement.

Lunge – The lunge movement consists of a modified version of a single-leg squat.  The individual takes a slightly exaggerated step to where the back leg knee almost touches the ground, and either returns to the upright position, or immediately proceeds into a lunge with the other leg.  Posture should be maintained, knee and foot position should stay linear, and upward movement should be initiated by the muscles in the leg.

Movement skill competency needs to be initiated and educated at the youth development level.  Creative and fun approaches to learning and practicing running mechanics, jumping and landing applications, and strength movements, establish athletic characteristics that will last a lifetime, and have the ability to reduce the likelihood of injuries especially overuse types.