The ability to run fast up and down the basketball court is a game changer when it comes to the offensive transition game, and adequately defending an ‘up-tempo’, transition style team.  Linear speed on the basketball court, especially with the basketball in hand, has been personified by the likes of Kyrie Irving, Russell Westbrook, and Lebron James (at 250 lbs.!).  Resistance training applications can be utilized for improving linear speed, i.e., horizontal power, on the basketball court by using resistance cord devices.  By applying load to the individual in the sport setting, allows them to not only work on speed/power development, but also to enhance ball handling skills, running technique and acceleration.

As mentioned in previous articles, resistance cord devices fall into the ‘minimal equipment/limited budget’ category in that they are typically less expensive than traditional weight training equipment, i.e., dumbbells, barbells, racks, machines, etc., but provide a unique, minimalistic stimulus to improving running velocity, both at top-end speed and during the acceleration phase.  Although it may be infrequent that basketball athletes reach their maximum top-end speed, acceleration both laterally and linearly is happening quite frequently, and most often in the horizontal direction.  Progressive cord-loading during practice while performing dribbling drills, passing drills, or shooting drills, can improve the quality by which these skills are performed.

One common misconception of utilizing resistance cords for athletic improvement is that cords don’t provide enough of an overload to the muscle groups associated.  Whether we are dealing with top-end speed, acceleration, or skill-specific drills, the fact is ‘less is more’.  Commonly, 4-6% of the individual’s body weight is factored into the stretch of the cord device.  The main culprit of too much resistance is developing poor skill mechanics, or compensating in such a way that different motor units are firing to perform the task.  Our goal is to stimulate the correct muscle groups in an efficient manner and enhance muscle firing capacity at the most economical level during basketball movement. 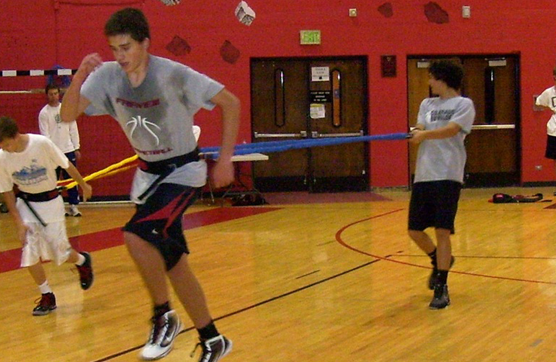 Anchoring points have also been a topic of consideration when utilizing resistance cords for horizontal power improvement.  Typically, loading points occur at the waist, the upper torso, and below the waist with attachment points at the mid-thigh and upper calf.  The waist anchoring point is the most common for both skill-specific loading and acceleration training.  Consideration to cord tension needs to be addressed in the waist loaded situation as too much load may cause excessive movement unrelated to the task, which can change skill mechanics and promote insufficient muscle stimulation.  In other words, if the tension on the cords is too high, overcoming fear can deviate the focus of the drill and the athlete ends up focusing more on safety than improving.  As mentioned earlier, if the load is kept at a minimum these factors can be reduced and training can be executed fast, precise, and successfully.  Still, technique needs to be analyzed via the ‘trained eye’ or video, to make sure specific positions are not hindered due to the resistance. 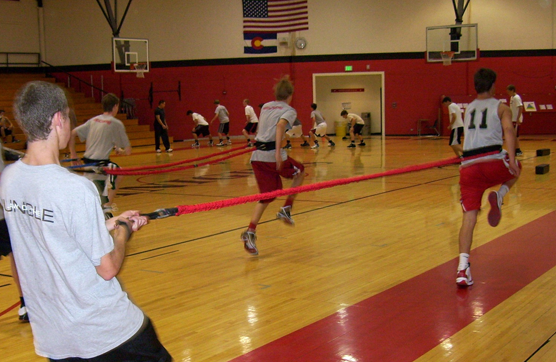 Another factor often overlooked during resistance cord applications for linear speed improvement, is performing the drill without resistance immediately following the cord-loaded bout.  This idea supports the concept of post-activation potentiation (PAP).  PAP involves the performance of a skill at maximal or near-maximal conditions, followed by a short recovery (i.e., anywhere from 2-8 minutes), to elicit enhanced performance gains in that particular skill/exercise.  In this case, the stimulus is low in comparison to a max effort squat or dead lift, which would allow less recovery time between bouts, but provides a near-maximal stimulus based on the velocity of the movement.  The speculated mechanism for this enhancement could be found in the recruitment of higher order motor units within the muscles involved with forward propulsion.  The stimulus is low, the application is fast, and the recovery is short, yielding the potential for impressive performance gains.

In conclusion, resistance cord training applications can be added to basketball specific movements with minimal equipment and budgets, and a working knowledge of fundamental basketball skill.  Velocity based movements with minimal loading, can maximize athlete performance by providing an additional stimulus during court running, dribbling, passing and shooting drills.  Improving court speed can open up easy scoring opportunities, improve conditioning, enhance sprint speed, and decrease the chances of injury.