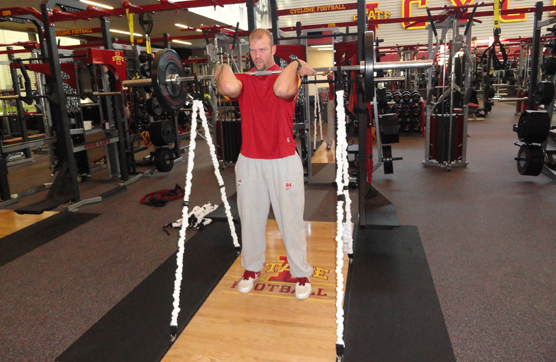 Olympic weight lifting has been utilized in most resistance training venues catering towards improvements in athletic performance.  Often referred to as the most sophisticated and technical resistance training exercises, Olympic weight lifting tends to be assigned to athletes with many years of resistance training experience who are under the guidance of coaches who specialize in these methods.  The ability to move resistance throughout the kinetic chain of the body provides the foundation of Olympic style weight lifting.  Specifically coordinated movements that allow athletes to maneuver the bar from the floor to the shoulders, or above the shoulders, while synchronizing the lower body (i.e., ankles through the shoulders) to load, contract, extend and support.  The goal is to somewhat mimic athletic ‘extension’ which occurs with most power-type movements in sports.  If resistance can be moved at high velocities, safely and under control, enhancements in athletic power should occur.

Variable resistance can be considered an application for Olympic-style movements for enhancing muscle stimulation and for improving total body power.  Superior technical ability in the specific movements needs to be established prior to the addition of variable loading.  Although not common until recently, the downfall of loading with variable resistance for Olympic-style weight lifting exercises has been securing the cords/bands to the platform area.  Along with safely securing, resistance cord reliability and consistency has also been difficult to determine with traditional circular band products.  The Trak-X™ System (Perform-X™ Training Systems, Denver, CO, USA) has provided a solution to this problem by providing a safe and secure anchoring system to properly load Olympic weight lifting movements.  In regards to previous articles (“Cord-Loaded Dead Lifts: Tips for the Collegiate Strength Coach” – 12/1/2017), a strategic and reliable cord design has allowed a detailed approach to loading and determining the resistance.  Variable resistance has been a very productive and popular addition to traditional movements because the cord/band characteristics match the changing mechanical and inertial variations in muscle movement patterns.  In other words, during the specified movement as the lifter progresses into the ‘easier’ portion of the exercise, typically full extension, the cords/bands provide additional resistance through the end range of motion.  This additional load forces the lifter to increase the acceleration of the resistance, overcome the normal deceleration that occurs in the late phase of the movement, complete the lift through a full range of motion, and allows for the recruitment of additional muscle fibers (typically high threshold fibers).

Current literature is very limited in regards to variable loading with cords/bands when performing Olympic weight lifting.  Most of the current research still recommends the combined resistance approach of implementing both traditional weight lifting movements with variable resistance applications.  This approach has shown significant enhancements in strength and power in comparison to using strictly traditional strength training practices.  The complexity of Olympic weight lifting movements demand good coaching and attention to detail, which alone could improve performance and power.  Variable loading can enhance these qualities, and may even improve overall technique, because of the cord/band properties.  Traditionally, 10% to 35% of the load during variable resistance applications should consist of cord/band resistance.  These percentages have not been proven or supported by peer-reviewed literature for Olympic-style movements because of the lack of studies in this area.  A lower percentage is recommended due to the sophistication and technical demand of these movements.  None the less, the variable loading of Olympic lifting movements should be considered for enhancing the power, velocity and acceleration aspects of these movements.  A true emphasis on force production is still necessary to complete the athletic development spectrum – force, speed, and power – thus traditional movements without cord-loaded resistance should still be implemented consistently as well.

In summary, variable loading for Olympic-style weight lifting exercise has the potential to be highly effective in a structured strength and conditioning program, especially for enhancing the areas of strength and power.  Anchoring devices like the Trak-X™ System, along with specific cord designs to effectively determine loading quantities, have made it easier to implement this application on a consistent basis.  Variable loading provides an increase in acceleration and velocity of the chosen movement, as well as providing an enhanced stimulation to the muscles involved through a full range of motion.

Coker, C. A., Berning, J. M., & Briggs, D. L. (2006). A preliminary investigation of the biomechanical and perceptual influence of chain resistance on the performance of the snatch. Journal of Strength and Conditioning Research, 20(4), 887.