An automobile with no brakes is literally an accident waiting to happen.

This holds true for athletes and athletic performance involving any sport or activity that involves sprinting, agility, and change-of-direction (COD) movements.  All athletic movement depends on two fundamental practices – starting and stopping.  Whether this involves an elite track and field sprinter, who simply starts and stops linearly, or a football athlete who starts, stops, turns, lunges, dives, etc., on every play.

Most of the emphasis that is placed on athletic movement preparation is focused around acceleration (starting) principles, or how quickly the individual can ‘get going’.  Deceleration is an avenue that has a range of important variables but often can get overlooked in a strength and conditioning programs.  By definition, deceleration is the slowing of movement in a controlled manner to which another acceleration in either the same or different direction can be executed.  During lower body athletic movement, the athlete is using the muscles of the mid-section and legs to cease the movement thus these areas are very important for not only improving performance, but also preventing injuries.  This article will discuss some basic principles surrounding deceleration training and how to prepare the body for adequate deceleration as it pertains to both performance and injury prevention.

Current literature has discussed the 4 main training components involved with deceleration that put the athlete/individual in a position to adequately slow the body.  These training components consist of power applications, reactive strength drills, dynamic balance and stability of the mid-section/core, and eccentric strength.  All of these characteristics need to be considered when programming for athletes involved in sports with a deceleration component, which literally involves all sports.

One application that may cover these four characteristics and provide variety to the training practice is variable loading through resistance cords.  As mentioned in previous articles, variable resistance has been a very productive and popular addition to traditional strength movements because the cord/band characteristics match the changing mechanical and inertial variations in muscle movement patterns.  Similar to strength training characteristics, variable cord resistance offers related qualities that force the athlete to overcome higher levels of resistance at the ‘easier’ positions of the movement.  The other unique quality offered is variable cord resistance allows the athlete to feel resistance at certain aspects of the movement, i.e., deceleration through turns, pivots, or COD maneuvers, not normally felt which activates more muscle groups throughout the exercise/drill. 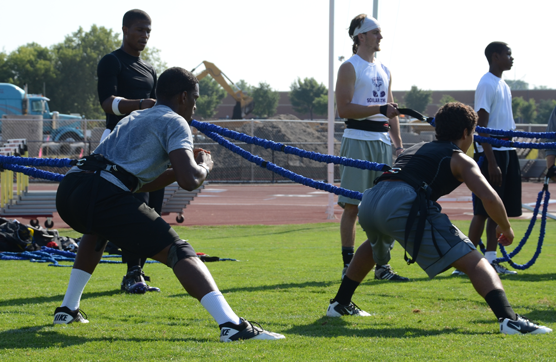 The power component can be activated through the use of variable resistance cord exercises that offer a time or speed element.  By definition, Power = Force x Velocity.  The rate at which a certain amount of work is done, defines the power component of the exercise.  When using variable resistance cords, the athlete is challenged to overcome a certain amount of resistance at a specific angle in order to properly decelerate the body.  This method allows the coach to put the athlete in various positions warranted by the sport while simultaneously loading.  As long as the drill involves overcoming the force elicited by the resistance cord along with a sense of urgency in the movement from one point to the next, the power component of proper deceleration can be accomplished through variable loading practices.

Reactive strength is similar in characteristics to traditional plyometric training.  Reactive strength usually involves some type of eccentric muscle action, followed by an immediate concentric muscle action.  Strikingly close to the Power component, reactive strength is used in a similar fashion but with less choreographed movements.  The variable loading application can work two-fold with reactive strength training.  First, the body and the nervous system need to react to stimuli from the task at hand or the drill being administered.  The athlete/individual may be performing an exercise where the coach is providing verbal cues for starting, stopping or COD drills, and that athlete needs to ‘react’ to the verbal cues based on the coach’s timing.  Second, if the athlete is anchored to a variable loading device, they now need to react or adjust to the changing resistances of the device.  Reactive strength applications, especially using a variable resistance device, allows both the muscles and the central nervous system (CNS) to adapt to the ever changing situations at competition velocities, that may occur on the playing field.  If the muscles and CNS are not trained in this manner, athletes will be inefficient or even ‘late’ during competitive situations, and may be predisposed to injury.  The athlete’s ability to react and generate force, whether it’s starting or stopping or both, can be very important in performance enhancement and injury prevention.

Balance and stability have often been associated with abdominal or ‘core’ exercises.  When the term ‘dynamic’ is added to the equation, movement is now associated and the methods for which we train for balance and stability become more complex.  DYNAMIC BALANCE and STABILITY as they relate to deceleration, occur from the ground up, but are typically trained from the top down.  Pelvic and mid-section stability allow the athlete better control of the center of mass (COM) which is associated with more control over the limbs attached to that area.  ‘Base strength’, as it is referred to in all levels of exercise science, not only entails strength in the large muscle groups (e.g., quads, glutes, hamstrings, back and chest), but also refers to the ‘engine’ or the midsection of the body.  If athletes lack strength in the area extending from the chest and upper back to the mid-thigh and hamstring area, compensations may occur in the upper or lower extremities to fill the void of that strength gap.  Variable loading applications that anchor around the proximal hip region, force the individual to control that area while being challenged in multiple directions.  Progressions in the amount of load should always error on the ‘lighter’ side, as athletes will adapt and adjust to the resistance, similar to strength training, and be able to tolerate additional loads as they improve.

Eccentric strength is difficult to target specifically during certain movements and tasks, and inevitably occurs during most if not all exercises.  Eccentric motion is the lengthening of the muscle which most often occurs after a concentric (shortening) contraction.  In order to have deceleration, we need acceleration (thank you Sir Isaac Newton!).  The eccentric, or lengthening component, occurs in all of the muscle groups associated with slowing or stopping a movement.  When we talk about training or adapting the body to specific movements, we have to train and adapt the body (and CNS) to stop those motions.  Eccentric loading tends to cause more muscle damage because of the ‘tearing’ away of the cellular level structures of the muscle, which leads to excessive muscle soreness and inflammation.  The body needs to become accustomed to this increase in soreness and inflammation, and adapt those muscle structures in a progressive and intelligent manner.  Variable loading through resistance cords considerably enhances these eccentric effects creating a more aggressive atmosphere for educating athletes on the importance of deceleration training.  Once body control and coordination have been established with certain sport movements, variable loading may be added to further challenge athletes.

In summary, the characteristics of deceleration training must be incorporated into a strength and conditioning program.  Emphasis on proper speed and agility training is important and allows the coach or instructor to properly address and educate athletes on the importance of learning to slow the body properly.  Power, reactive strength, dynamic balance and stability, and eccentric training lay the foundation for adequate deceleration adaptation and should be practiced and addressed on a consistent manner to train not only the muscles, but also the central nervous system.  Athletes should not have to ‘pump’ the brakes when slowing down during competition.  The ability to quickly accelerate and safely decelerate will help make the athletic experience much more fulfilling.