Plyometric exercise has become a popular method for enhancing sports performance over the last two decades.  Stemming from early Russian/Soviet Union practices, plyometrics started as simple exercises involving hopping and/or jumping, both in a vertical and horizontal direction.  The sophistication has increased over the years, and with that sophistication, both coaches and athletes have gravitated toward complex movements to expedite the power/strength curves.  With this expedited approach comes the potential risk of injury and/or overtraining.  The fundamental approach to integrating plyometrics starts with basic movements in all standard directions – forward, lateral and diagonal.  Once these directional movements are established, complex applications can be added and progressed to enhance performance.

Plyometrics, by definition, typically involves any movement, vertical, horizontal or lateral, that places the muscle in a stretched or lengthened position, followed by an immediate contraction or shortening of the muscle.  Regardless of intensity, this mode of exercise attempts to mimic athletic competition movement, i.e., running, jumping, or throwing.  Similar to these movements, if plyometrics can be properly progressed to allow adequate adaptation of soft tissue (muscles, tendons and ligaments), individuals are positioned better for athletic improvement. 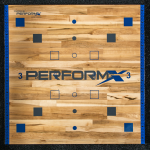 in progressions.  This method was first established, in the United States, by John Frappier through specific line drill patterns.  Don Chu, Ph.D., later outlined this concept in his book, “Plyometrics”, with emphasis on energy system development, and the individual’s ability to progressively work the feet away from the body’s center of gravity.  With these goals in mind, along with body awareness, accuracy and speed, plyometrics can be progressed from low intensity movements to high intensity movements, and from simple to complex exercises.

The Perform-X Plyometric System offers the most fundamental approach to starting a plyometric routine.  The combination of traditional line drills and ‘point of accuracy’ patterns, give the user intelligent progressions toward energy system development, soft tissue adaptations and general proprioception.

By taking a fundamental approach to adding plyometrics to one’s routine/program, the potential for performance enhancement is improved and the possibility of injury is lessened.  Strength and power qualities can be enhanced through plyometric movements, and have been proven to be one of the main ‘ingredients’ in overall athlete development.