Why you should train with Lift-X Strength Cords

We all agree that muscular strength and power are critical for athletic performance. And most strength and conditioning programs utilize the squat, deadlift, bench press, and clean as the cornerstone exercises or “staples”. And depending on training experience, program design and attendance, athletes will become stronger performing these barbell exercises.

Although the loaded barbell is a great tool – and perhaps the greatest tool in the strength and conditioning toolbox, it can be enhanced using resistance cords (or bands). When the Lift-X Strength Cords are attached to the barbell, the provide variable resistance instead of a constant external load such as that when performing conventional barbell weight training.

More specifically, variable resistance (or accommodating resistance) “varies” the load throughout the range of motion of the movement.  During a conventional barbell exercise, the variability occurs as a decrease in load during the descent phase of the squat or bench press, and an increased loading during the ascent.  With variable resistance and the Strength Cords, the load increases as the mechanical advantage of the lever system improves.   In other words, as the exercise gets easier the load gets heavier!

Ok, cool… but so what?  Is it effective? Absolutely! Several research studies comparing conventional strength training to variable resistance show that variable resistance training offers advantages in producing the greatest comprehensive adaptations in muscle size, strength, and power. And here is what a Big 10 strength and conditioning coach says after a microcycle of variable loading, “when the bands come off, the numbers go crazy!”

Bennington (NE) High School’s Brandon Mimick adds  “This past summer we made a big jump in our strength numbers.  We went from having only 4 football players in the 750 Club on bench-squat-clean to 13! I believe utilizing the Lift-X cords in the past year has contributed greatly.” 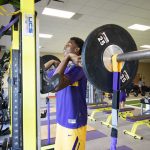 And it’s not just for football players. The USA Today High School Basketball Team of the Decade, Montverde Academy has “taken their jumping, power training and contrast work to another level using Lift-X cords” says Tim Crowley. “ Love it!”

To learn more about the Perform-X Strength Cords, click here.