Despite its increasing popularity and effectiveness shown in research studies, little is known about its real-world implementation into strength training programs. In this blog, Chris Bartels of St. Ignatius College in Sydney, Australia shares his methodology and thoughts of incorporating variable resistance loading in high school-aged athletes.

In the off-season, we train one session per week with bands primarily with the squat & bench press but only for student-athletes that train 3 sessions per week which are the older, more advanced athletes. We don’t have any form of velocity measuring devices (such as PUSH, Tendo or GymAware) so we went with 50/55/60% of 1RM straight bar weight (not considering added load of bands) over three weeks very similar to the Dynamic Effort prescriptions made popular from those that follow Westside Barbell. Again, the % mentioned is of their 1RM with straight weight only. Depending on the height or limb length of the athletes, band tension at the top of the squat is generally between 30-40 kg (66-88 lbs) while the bench press comes in between 15-20 kg (33-44 lbs). This is the lightest band tension we can use based on our equipment and bands available. As mentioned, all athletes start with 50% of 1RM plus band tension and progress % load only for 3 weeks before taking the bands off for an additional 3 weeks. The athletes will still always have a straight weight version of the lift included throughout the program on one of the other two training days. After the 3 week cycle that included variable resistance, we take the bands off and for another 3 weeks using 65/70/75% of 1RM (no bands) with a focus on bar speed. The set-rep scheme is 6×2 for squat and 6×3 for bench press. 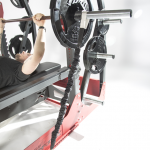 I do continue with the bands on the bench press in-season. At this time, I probably would stay away from the bands on the squat during the competitive season as the athletes began mentioning hip flexor tightness. However, this may be related to the demands of running and it is recognized that many other strength and conditioning coaches continue to use bands in-season as well.

Additionally, we had two athletes who had finished their studies (graduated) but were preparing for a major competition. With strength not a major concern, we programmed two dynamic effort / velocity days where bands were used in addition to the one max strength day. The same loading strategy was used as described above – 3 weeks with bands then bands taken off for the remaining 3 weeks, but instead of progressing the loads, we repeated the wave in reverse to bring them to a taper (60/55/50%). In my observations, this worked quite nicely. We also added the bands to some different movements (rows, RDL) for these athletes.

Using Variable Resistance for the Squat Exercise in Young Athletes